Before leaving the U.S., I had booked a night at the Riad Arous Chamel, located in the middle of Tangier’s Ancient Medina. The night before we set off from our house in Spain, Chris and I both entered the location of the hotel into our Garmin Fenix GPS smart watches. Upon arrival, our goal was to go straight to the hotel to get our bearings. We knew exactly where the hotel was and it couldn’t be easier with the help of our technology. Or so we thought.

The game began as soon as we set foot on the African continent. Taxi drivers and vendors selling various Moroccan goods were camped around the ferry terminal exit. As we passed the menagerie, several determined taxi drivers approached us insisting that they take us to our destination. The three of us developed stone cold expressions and rarely looked around without intention. The best way to make yourself vulnerable is to look lost or confused.

The medina is only a ten minute walk from the port, and the highway we walked along was fairly clean and well kept. In fact, we were the only ones walking from the port to the medina. 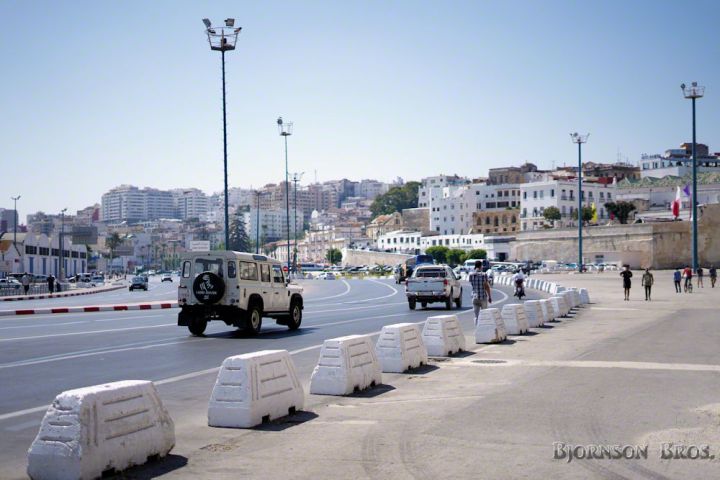 An older man, possibly bearded and wearing a dark brown djellaba, had been standing on the side of the road and began walking along side, greeting us stating, “I show you to Kasbah.” My dad repeated “No” as we hurried to get away, but he stubbornly remained at our side repeating, “very welcome, very welcome.” As we passed a currency exchange center, my dad urged us into the building, later explaining that if he kept following us to our destination, he would expect us to pay him. After checking the exchange rate, we were ready once again to try to evade our friend. We met him again, he was obviously waiting for us, but we escaped after being persistent despite his assertive “Very welcome, very welcome.” We continued walking quickly and with confidence, as we didn’t want to be perceived as lost tourists. Without knowing what lay ahead, the three of us bravely charged into the labyrinth of narrow alley-ways. The ancient buildings were decorated with plaster, cracked and peeling off around doorways and windows. With every corner we turned, we were greeted with the eyes of men and boys dressed in djellabas and kaftans. Open doorways revealed that much of the buildings contained men working looms, weaving textiles of all sorts. As we continued to explore, gangs of boisterous young boys shouting and laughing ran past us, and a boy crossed our path holding a notebook and binder paper that contained Arabic writing. I concluded that it must have been schoolwork as he was showing the paper’s contents to an old woman dressed from head to toe in cloth. 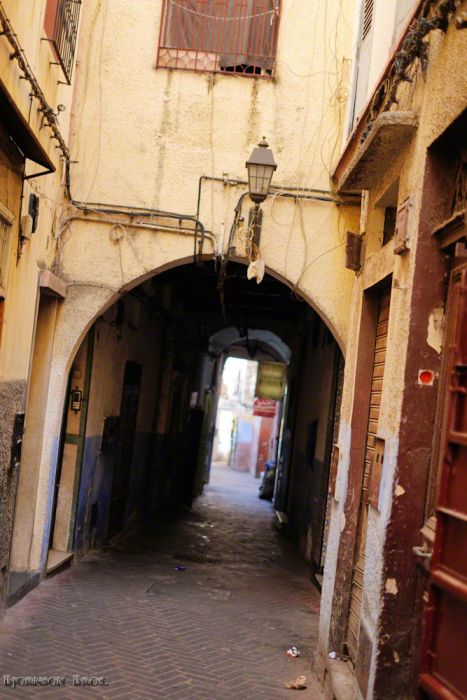 Continuing to plunge ever further, Chris and I glanced at our watches every thirty seconds or so to make sure we were on track. Every so often, I heard a “blup, blip!” as my watch beeped and vibrated to alert me that we were on course. Occasionally, we stopped so that Chris and I could compare our watches to make sure that they were in agreement as to which turn would be the best to take. In times like these, local men would approach and linger deciding if they should offer assistance. Our serious expressions probably deterred a few of them.

I also began to notice that coughing was as constant a sound of the hustle and bustle, as were the motorcycle engines.

We decided to turn up a street made of concrete steps because we recalled seeing others that were wearing backpacks and looked like tourists coming from that direction. We found ourselves carefully watching our steps to avoid the cats and kittens that had sprawled themselves about the stair steps and didn’t seem at all concerned about being stepped on. In the U.S., this would have been a big problem, but it seemed like the locals were completely used to what seemed to us like a cat infestation. This path eventually lead to the Kasbah and a chance for us to catch our breath from the claustrophobia I felt from the medina’s narrow passage ways that occasionally smelled of sewage.

In the Kasbah’s parking lot, a sandy patch of dirt, we were relieved to find a map fastened to a post that gave us some sort of idea to our current location relative to where we had entered the medina. As I pulled out my phone to compare my downloaded offline google map, another man dressed in a djellaba who had probably overheard our conversation approached asking, “Looking for Riad arous chamel?” I wasn’t quite sure what he had said, so I repeated the hotel’s name back to him to confirm. “Follow me” he said, “I take you there.” He made a waving gesture with his hand, “Follow me. Everybody stays there. It is very close.” 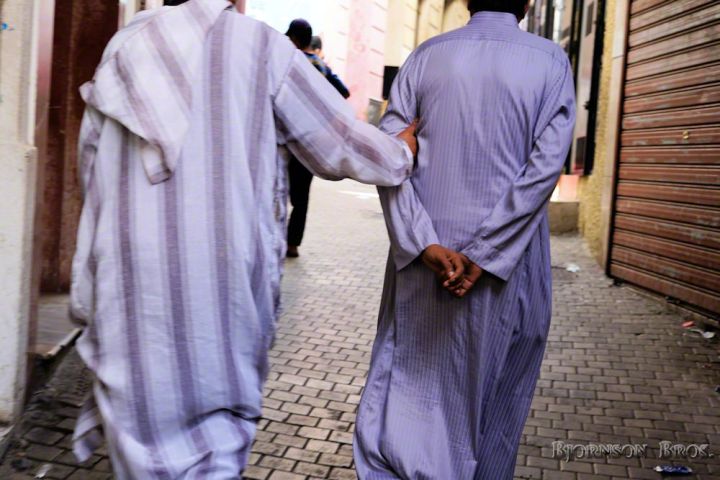 We didn’t really have another choice so we shrugged our shoulders and began following him. We passed a few men resting in the shade of an awning that approved of our choice of guide, exclaiming, “Ah, you have Mohammad! Mohammad is a very good guide!” After a few minutes of walking and several phlegmy coughs of our guide, we began down streets that I recognized having passed through earlier. He finally stopped and pointed at a small plaque that was a few inches above my eyes. Riad arous chamel. We had walked right past it! Multiple times!

Our guide now took the opportunity to ask for payment. He held out his hand and my dad reached into his bag and placed three euros on his palm. “How about ten? three? This is nothing. Ten.” “Okay, four euros.” The man became slightly emotional and I began to feel bad for him. The exchange didn’t last long and after realizing that my dad could not be budged, he accepted his payment of four euros with a smile and walked away after patting my dad on the back. After seeing how happy the man was as he walked away, I now understand that to the Moroccan people, the enjoyment of bartering is valued just as much as the monetary payment they receive.

The door to the riad was dark brown, and heavy. We attempted knocking, but there was no response. My dad noticed a box with buttons to the upper right in the wall next to the door. He pushed the button and a staticky voice answered. He replied with, “we have a reservation.” The door automatically unlocked and my dad looked at me with a worried expression and asked, “Are you sure you want to stay the night here?” “I think we should go and look around some more.” I insisted that we at least go inside and see what it looks like.

We pushed the door open and went inside. The interior was dimly lit and smelled old, but seemed clean. We stood in a tiled gathering area with ornate decorations and after waiting in silence for several minutes, were eventually greeted by a young, French speaking woman and older French speaking gentleman. We told them we had a reservation under Bjornson. “The reservation is for two.” He pointed out in a thick French accent. “Yes, but we ended up bringing a third person.” “There are only two beds, I will have to get another bed.” “Yes, that is fine with us” I nodded. The girl, instructed us to follow her upstairs to our room.

We decided to catch the 6:00pm ferry back to Spain.